Dew Claws on Dogs – Keep Them or Cut Them? 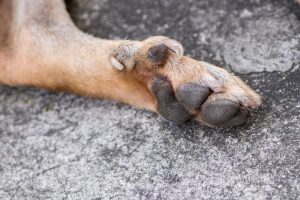 Have you ever noticed that the little toe of your dog is slightly higher than the rest of the paw? In some cases, it is loosely attached to the leg whereas in other cases it is tightly attached. The dog claws of this type are known as dew claws on dogs. In this write-up, we are going to discuss WHAT ARE DEW CLAWS, THE RISK OF DEW CLAW INJURY, and THE DEW CLAW REMOVAL PROCEDURE in brief. It will help you to know about the dew claw of your dog more closely.

What Are Dew Claws?

If the dog is unable to touch the ground with the small nail on its foot then it is known as dew claw. Though it is also known as the thumb of your dog but it is not as important as the thumb of a human being.

Nearly 40 million years back a cat-like mammal was discovered as an ancestor of the dogs of the modern age, which can climb on trees by using its all the toes. With the evolution of modern dogs, the structure of their paws has been altered to permit them to hunt on the land at a faster speed. Basically, dew claws are considered as the remaining part of the process of their evolution. Usually, in some cases they have dew claws in their rear feet otherwise they have it in their front paws.  In some breeds like Great Pyrenees, the Briard, and St Bernard, you can commonly see an extra toe known as a double dew claw.

The Risk of Injury with Dew Claw

Your pet may cry and limp if its leg with injured dew claw is touched. You can expect a lot of bleeding when its claw is torn off or caught somewhere. It is because of the quicks in their nails which have separate channels for the supply of blood.

You should take your pet to your vet if its dew claw has got injured. Your vet may cut it off completely if it is ripped off but still attached to the leg. He can also trim its nail if only a part of its nail is broken. To stop the bleeding completely he will apply a bandage on the injury spot. Though these injuries look serious due to pain and bleeding still they are not very serious. Your vet may prescribe some antibiotics and pain medicines to reduce the risk of infection.

Suggestions about The Removal of Dew Claw

The removal of dew claws from the age of the puppy is very common in many countries like the US. Usually breeders remove dew claws even a few days after their birth because at that time it is not attached to the muscle tissue or bone.

On the other hand, AVA or the Veterinary Association of Australia does not recommend the removal of dew claws unless essentially required genuinely due to medical reasons. according to them, it should be done only when necessary as it is a kind of surgical process used to change the natural condition of the animal.

The removal of dew claws is recommended in Australia if there is a chance of injury due to loosely hanging off the paw or undergoing a procedure of standard level where general anesthesia is used like De-sexing etc.

The Procedure of Removing Dew Claw

The removal of dew claws includes a stepwise procedure like:

STEP 1: General anesthesia is used for this procedure. The instructions of the vet are to be followed to prepare the dog like nothing should be given to the dog to eat on the day of surgery.

STEP 2: The skin in the region of the dew claw has to be disinfected to prevent any kind of infection.

STEP 3: Then the toe is removed completely by cutting through the bone, skin, and muscles quickly with the help of surgical scissors.

STEP 4: After the removal of dew claw, non-dissolving, or dissolving sutures will be used to stitch the wound.

STEP 5: The wound is covered with a bandage to protect it from environmental infections.

In small puppies, after a few days of their birth, the process of removal of dew claw is very easy because of the non-development of their muscle tissues and softness in their bones.  The entire procedure may take 15-30 minutes only but your pet will be relieved from the vet clinic after the effect of anaesthesia will be over i.e. up to 2-3 hours.

Pros and Cons of Removal of Dew Claw

Thus by removing the dew claw of your dog, some of its major muscles will be malnourished as it may not be able to use that muscle again. It can also increase the risk of arthritis, another health condition for dogs. Such health conditions can impact the sports activities of your dog.

Care after Removal of Dew Claw

You should use an Elizabethan collar on the recommendation of your vet if you dog licks or bites its paws.
You should check the wound daily for any puffiness or redness as your pet can get distressed due to it.
You should visit your vet after 5-7 days of surgical removal of dew claws is non-dissolvable sutures were used to close the wound.