The finger monkey also goes by the name of the pygmy marmoset. This tiny little creature is a member of one of the smallest monkey species on the globe. Baby finger monkeys are so tiny that they are easily held in the palm of your hand. These smallish creatures are native residents of the South African rainforests. They spend the wide majority of their lives snacking on Arabic gum high up in the treetops.

Unfortunately, many people are promoting content around why finger monkeys make great pets.  PetLifeWorld.com has supported RedApes.org and shares the same stance that primates should NOT be kept as pets.

The finger monkey earns its name by ranking as the world’s smallest primate. The monkeys are about five to six inches in length. And on average they typically weigh about 3.5 oz. This paints a picture of an undeniably cute animal. And the finger monkey’s small size and cute features have made many people wonder if they’d make a good pet. The simple answer is that no, finger monkeys should never be kept as a pet. However, it’s also important to understand why finger monkeys are best left in the wild.

It’s important to keep in mind that finger monkeys are primates. It’s true that they’re the world’s smallest primate. However, finger monkeys share an important trait with other members of the primate family. The finger monkey is an incredibly intelligent animal with many of the same concerns as humans. The more advanced the animal’s brain, the more complex it’s physical and emotional needs are during childhood. The needs of dogs and cats are considerably similar. And yet it’s taken a huge amount of time to properly domesticate these animals. A primate is both more intelligent and more in need of special care. But much as a finger monkey baby needs its mother, a finger monkey also needs the company of another finger monkey for proper socialization.

Ask any parent about their child’s teenage years and there’s sure to be a lot of exasperated sighs. A child’s teenage years are notoriously difficult for parents. However, now consider how difficult those teenager years would be if the angsty and often angry teen didn’t have the benefit of language. A finger monkey goes through a similar process during its maturation. It can become moody, angry and generally a far cry from the cute pet it used to be. And one can’t really count on this disposition ever fully returning to what it used to be.

The big problem with a finger monkey’s maturation is that much like humans it’s a social creature. Again, it’s equally important to keep in mind that this is a uniquely intelligent animal. Dogs and cats are obviously quite smart. However, any primate takes intelligence to the next level. Imagine what it would be like to have the same drives, hopes and needs that you have in your ordinary life. Now imagine if you’d been raised by monkeys. You’d yearn for the presence of human friends and family. You’d have both instinct and emotion yearning to find a partner to create your own family with. But you’d be the single human in a colony of monkeys. That’s the exact position which finger monkeys find themselves in if they’re kept as pets.

A finger monkey has the same needs as other primates such as humans. It yearns for a social environment made up of other finger monkeys. But instead there’s nothing but the looming giants that are humankind surrounding it. This isn’t to say that finger monkeys don’t like humans. But they’re quite clearly not human. They’re a totally different kind of primate which yearns for its own kind. Like a human separated from other humans it simply can’t feel fully happy or content without the presence of peers.

The health of both finger monkey and human is also at risk if the two are living in the same household. One of the largest issues is that finger monkeys can act as the host for any number of bacterial, viral or parasitic organisms. This is true to an extent for any pet. Anyone who owns cats or dogs can attest to the trials and tribulations of flea season. However, finger monkeys present some unique issues which go above and beyond the risks posed by other animals.

One of the most difficult aspects of a finger monkey’s health comes from the fact that it’s a primate. A dog or cat are largely subject to different disease concerns than humans. This is because the biology of a canine, feline and primate are all quite distinct from each other. When a human catches a cold the family dog and cat are almost never in risk of catching it. And the reverse is true as well. This is because a primate is typically a very different host environment than canines or felines. However, humans and finger monkeys are both primates. This means that a pathogen which specifically targets elements which all primates have in common will be able to affect both the finger monkey and a human.

What’s more, there’s far more opportunity for disease transmission between a finger monkey and a human than there would be between two humans. To return to an earlier point, finger monkeys tend to act out as they grow older. These little monkeys are also prone to sudden fits of unanticipated anger. In short, finger monkeys may well bite humans. The bite of a finger monkey is seldom enough to be more than an annoyance in terms of pain or physical damage. However, a bite is all it takes to transmit a wide variety of diseases. And this leads into another huge issue which can impact the overall happiness of a finger monkey. It’s usually not possible to find proper veterinary care for finger monkeys.

The lack of proper medical care means that a finger monkey won’t have the treatment it deserves when suffering from ailments. And it also increases the chances of any of these ailments being passed on to humans. In the end this highlights the overall theme seen in every point so far.

A finger monkey is undeniably cute. However, one needs to take a step back and consider what being a pet would mean for the monkey itself. A finger monkey would be deprived of his natural environment. He’d find himself totally lacking in the normal social hierarchy that he’s emotionally dependent on. The monkey will never be able to feel the joys which stem from being a member of a larger family and creating one of his own. And in the case of physical ailments the finger monkey won’t be able to receive adequate care.

A human would quickly find himself incapable of properly caring for a finger monkey if he tried to keep it as a pet. But even worse, the finger monkey itself would suffer under the weight of physical, emotional and mental strains if it was kept as a pet. All of these reasons and more demonstrate why finger monkeys just aren’t suitable as a pet.

That’s our official stance on finger monkeys as pets.  We do hope you learn more about these special primates in the content below. 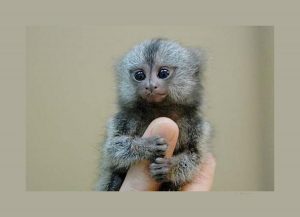 When one of these little guys is living in the wild, it will eat a plentiful amount of Arabic gum, resin, and tree sap. They also like to snack on small insects and butterflies as well. At other times, you may discover a finger monkey eating healthy amounts of fruit or sucking on sweet nectar. Once you own this gorgeous little animal, it’s important to pay close attention to their diets and especially the amounts of vitamin C and vitamin D3 that they get. They require these vitamins in high amounts.

Again, we don’t advise doing this, but the reported prices of buying one of these little guys isn’t going to be cheap.  Besides taking on a task like none other, you’ll set yourself back $1,400 to $4,000.  Care doesn’t exist for these primates, very few people know about them and could properly diagnose a disease or ailment, so again, don’t buy them.  It’s just not right.

Here’s a compilation of finger monkey videos.  They are the cutest!

Small, exotic pets are all the rage these days because they are a very trendy pet at this point in time. Thanks to irresponsible blogging out there, finger monkeys are one of the more prominent and common pets that exotic pet owners tend to gravitate toward. We’ll once again fall back on our stance against owning them.

Remember that this is a primate and it’s an animal and it will always remain an animal. As a finger monkey gets older and heads toward adulthood, it could very well become very aggressive. That’s why you should avoid this pet if you’re looking for an emotional support animal. Even more important, you may have a difficult time getting a therapist to provide an ESA letter for a finger monkey.  Lastly, good luck getting past the ESA hotel laws!  Most people don’t know what a finger monkey is, so it won’t be a swift transaction if you are lucky enough to get the ESA letter in the first place.

These animals learn fast and they are quite clever. Even with plenty of human contact, a finger monkey living without the contact of other finger monkeys may have a difficult time surviving. They need to be around their kind often because these monkeys typically tend to live in groups of 6 to 9 while out in the wild in their natural habitat.

Where Can I Buy a Finger Monkey?

Again, people who have lost their mind are telling people it’s safe to own finger monkeys.  It’s not.  If it was, we’d have a list of recommended places to buy them, but since we are so opposed to this, we won’t even touch this topic.

How Big Do Finger Monkeys Get?

Finger monkeys grow to be about six inches tall when fully grown.  Imagine how small that is and what could go wrong owning one in an American household?  (Facepalm.)

How Long Do Finger Monkeys Live?

A pygmy marmoset or as we’ve more commonly referred to it, the finger monkey, can live up to 16 or so years.

Is It Legal to Own a Finger Monkey?

Every state is different, so get a lawyer.  Maybe that advice alone will deter you from buying a finger monkey, so hopefully our point is made.

What Should I Do When My Dog Eats Glass?

Cigarette (Nicotine Poisoning) in Dogs & What to Do