Can Dogs Have Down Syndrome?

Human beings and dogs share many health similarities, but our related health issues are far from identical.

Regardless of whether we have specific information on this topic or not, we do know for certain that some dogs experience similar symptoms to Down Syndrome.

Before we dive into this topic further, we’ll take a broad look at Down Syndrome and explain specifically what it is.

An Explanation of Down Syndrome 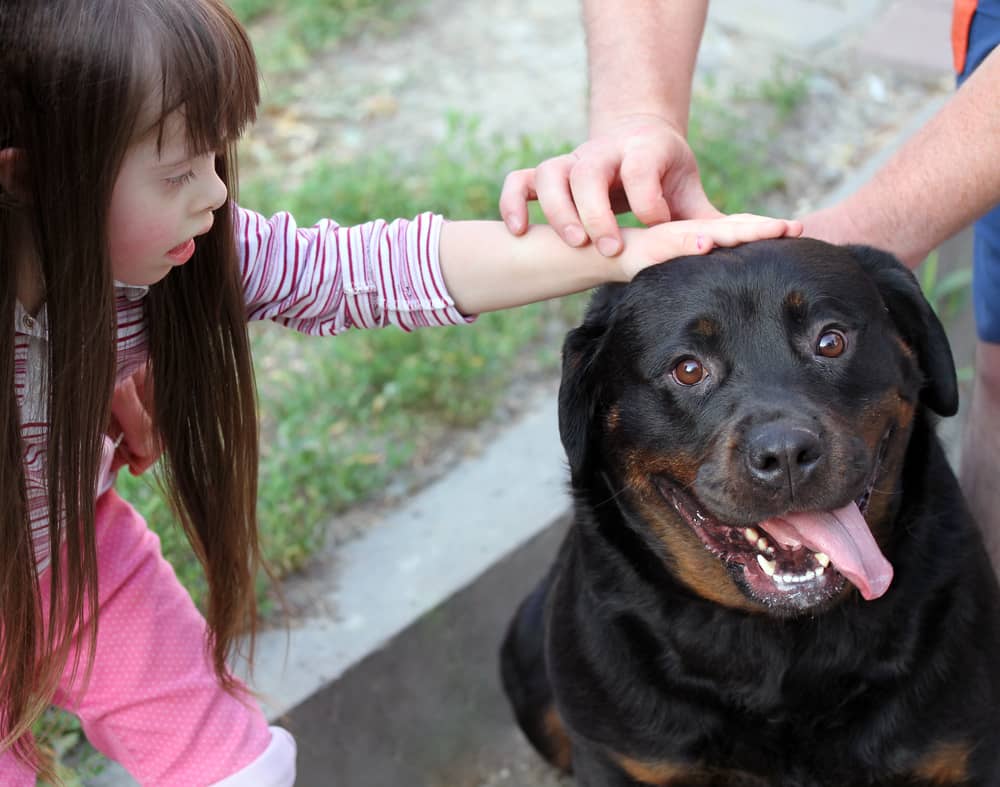 Life’s building blocks are made up of our genes. They contain a wide range of information that dictates different things that happen to your body like what color hair you’ll have, what color eyes you’ll have, and more.

Trisomy 21, better known as Down Syndrome, isn’t a contagious disease by any means. But it is a birth defect that happens due to genetic mutation. The issue is with chromosome 21.  People suffering from Down Syndrome have a partial or full additional copy of chromosome 21.

Our genes consist of RNA and DNA which makes up our genetic code. This code is directed to our chromosomes, which become a piece of the nucleus of the cells in our body.

If any of these genes develop a problem, many types of medical complications can arise. Genetic issues stem from mutations, otherwise known as abnormal changes, that act differently than normal genetic coding.

The mutation or alteration to the genes can create bad or good permanent changes. In some cases, these mutations provide real benefits, but in other instances they do not.

As mentioned, it’s a genetic mutation that causes Down Syndrome. If you are a human being that was born with this specific problem, it happens because you contain an extra chromosome. There isn’t a cure and it’s something that lasts for the entirety of your lifetime if you have it.

Human beings with Down Syndrome have very specific symptoms. They include the following:

Typically speaking, people with Down Syndrome often experience slower development from an intellectual and physical standpoint. They might experience severe or mild cognitive impairment, which varies between different people.

Additionally, people living with Down Syndrome might suffer from other medical problems including sleep apnea, hearing loss, heart troubles, and vision impairment.

Finally, life expectancy of those with Down Syndrome varies between people. Although some can live beyond 60 years old, others often have much shorter lives.

Animals Also Suffer from Down Syndrome

All animals on planet Earth have chromosomes, but the amount varies from each species. Every animal, including dogs, can also develop defects in their chromosomes.

Nevertheless, chimpanzees are the only animals that have officially developed Down Syndrome besides mice that were genetically engineered.

Down Syndrome has been found in chimpanzees on two different occasions. Once in the wild, and another time when a female chimp was born in captivity.

The one in the wild that showed Down Syndrome symptoms lived for 24 months. The other chimp named Kanako, born in Japan, suffered from trisomy 22 which is very similar to human Down Syndrome.

Can other animals develop Down Syndrome symptoms? How about dogs?

Down Syndrome Symptoms for Dogs 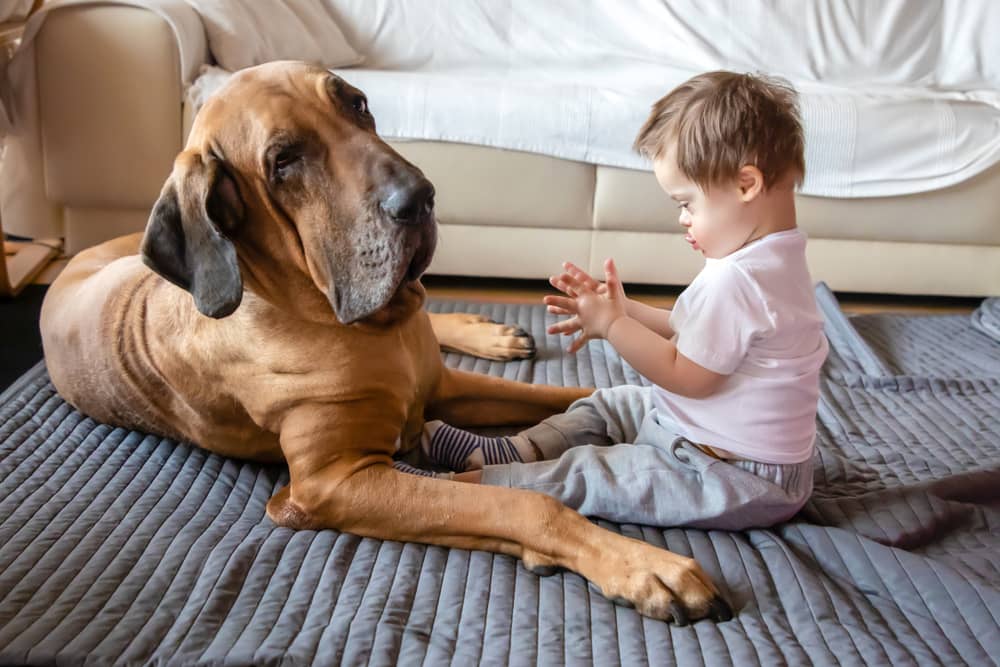 As mentioned previously, veterinarians and researchers aren’t 100% sure whether or not dogs have the ability to develop Down Syndrome. Regardless, dogs definitely can develop symptoms that are similar to Down Syndrome. Clearly, dogs can certainly develop genetic mutations, but the mutations might not be specifically trisomy 21 like the development in humans.

Although numerous dogs have developed similar symptoms, it’s not necessarily seen that often, and for dogs this is actually something that rarely happens. Dogs experiencing genetic mutations usually end up dying very young. Or even worse, the puppies aren’t even born when they have genetic problems.

If a genetically abnormal puppy survives the birthing process, it usually doesn’t live long enough to begin developing symptoms. The mother of the puppy can see that something’s wrong and either kill or reject the animal.

Furthermore, dogs and puppies rarely endure testing for their genetics, so they can either be misdiagnosed or not diagnosed at all. And there are puppies that could potentially never show signs or symptoms of the condition until they reach one or two years old.

Genetic Abnormalities in Dogs That Bear a Resemblance to Down Syndrome

It’s true that certain puppies, when born, exhibit birth defects that are similar to Down Syndrome. A few of the symptoms and signs presenting great similarities include:

The symptoms mentioned above are common to different health problems, including pituitary issues leading to dwarfism, congenital hypothyroidism, and other medical problems.

Should your dog or puppy show any of these symptoms and signs, take them to a veterinarian right away to receive a diagnosis. Receiving a diagnosis comes down to eliminating different health problems in many cases. So, the vet might need additional time to determine the reason for these symptoms.

Puppies with Down Syndrome 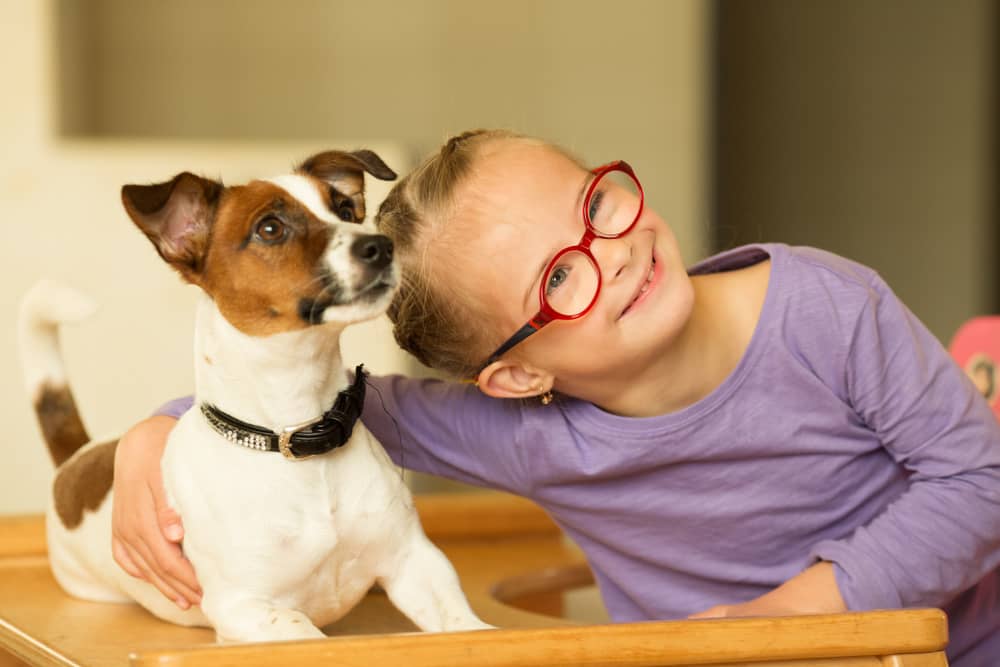 When a puppy becomes an adult, it’s possible you’ll start recognizing facial features that seem irregular. They could be very noticeable or only slightly noticeable, depending on your dog.

Or, your dog’s ears may seem misshapen or it could potentially have a short neck. Another thing to look out for is when you touch your dog, is it dry and warm on the nose? This is a symptom of a genetic abnormality.

When dogs exhibit symptoms similar to Down Syndrome, one of the issues your pup might experience is having a difficult time hearing. When you call the dog, he or she may not respond right away. Or when sounds are made in the dog’s vicinity, it may not react the way other dogs would.

If a puppy has this condition, it’s also potentially vulnerable to developing eyesight problems. The eyes might experience cloudiness, which means cataracts are a real potential problem.

Furthermore, your dog or puppy might begin to experience possible behavioral issues. It could potentially fall behind in development when compared to other dogs of a similar size and stature and age. As an example, if you compare your puppy to other dogs in the litter, he or she may seem a lot smaller in size and is definitely below average.

Lastly, it’s possible your puppy will not eat following a regular schedule. And it might not accept potty training as well. When some puppies have this condition, it seems like they aren’t very interested in playing with other puppies too. 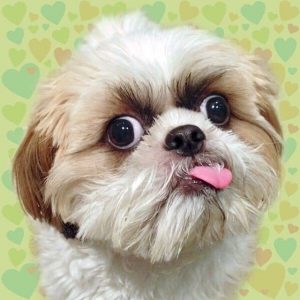 The Shih Tzu dog breed is one that tends to present symptoms that definitely resemble Down Syndrome.  A wide range of these dogs suffer from medical problems including brachycephalia and chondrodysplasia.

When a pup suffers from skeletal defects it’s suffering from chondrodysplasia. The condition makes the dog’s bones seem like cartilage, instead of having really strong bones. Dogs with this problem typically tend to have a large chest and head, bowed and short front legs, and their back is too long.

The discs in their spine do not have enough elasticity either. This results in dogs with joint problems as they get older, as well as having arthritis.

Dogs with a round head have brachycephalia, and typically their face is shorter than normal. Shih Tzus facing this condition have a difficult time breathing. The puppy might sound like it is snorting at all times, and this is especially true when it seems like it is excited.

The nostrils of your pup may seem pinched and way too slim. In other instances, the dogs have soft palate problems, which leads to coughing, gagging, and noisy breathing among other issues.

Protruding eyes is another symptom of this condition. But it’s also important to know that dogs with short faces potentially experience brachycephalia and develop breathing problems during their life as well.

Adopting a Dog with Down Syndrome

Are you seriously considering adopting a dog showing symptoms of Down Syndrome? Many dog owners aren’t sure if they should go through with it.

Remember, this is going to be a pet that has special needs. You will need to have patience and time to provide extra care for the animal. And you’ll have to remain devoted to your pet throughout the entirety of its life as well.

Another thing to consider is medical care. Many dogs with medical conditions require additional care which could be an added expense.

Similar to human beings, dogs with Down Syndrome will experience the effects differently and suffer from different symptoms depending on the animal itself. Certain dogs could end up with severe disabilities. On the other hand, other pooches might only suffer from the slightest abnormality. In fact, people might not even know that an abnormality is present at all.

Just remind yourself that this is a lifelong commitment and it’s very real. It can get expensive because of the extra medical treatments needed, but it’s a wonderful thing to do nonetheless for a dog that is suffering.

Thanks for reading this guide and we hope that it helps you understand Down Syndrome in dogs much better. Good luck adopting a dog with special needs and remember to take good care of the newest member of your family!