The dog that is a cross between a Miniature Schnauzer and a Shih Tzu is affectionately known as a Schnau Tzu. It’s part of a particular dog breed that was originally crossbred between 30-40 years ago. Many dog owners are falling in love with this breed and buying it up in droves because it’s becoming very popular. In fact, you’ll find many celebrities proudly towing around their Schnau Tzu in public. The average person is beginning to see this breed and become more familiar with it each and every day.

The mixed breed concept isn’t new to anyone at this point. As a matter of fact, this practice has been around for hundreds of years in recorded history and it could be around even longer. Nevertheless, when breeds of dogs are mixed you never know what the result is going to be. To get a better picture of the Schnau Tzu, we will take a look at the parents and share the various characteristics of the Miniature Schnauzer and the Shih Tzu.

The Shih Tzu breed of dog has been around for so long that it’s one of the oldest that currently exist today. Its roots trace all the way back to Tibet and mainland China. These two groups of people believed that the Shih Tzu is one of the best dogs to have as a companion.  In fact, they would write about them and paint them and these words and images can be found in numerous documents of a historical nature. These dogs were recognized as intelligent and happy. Many even looked upon them as “little lions.”

The Shih Tzu was originally a dog that could only be found in Asia, but that changed in 1928 when a pair of them was brought to England by English people. And in 1969 the Shih Tzu was officially considered a breed by the American Kennel Club. All in all, the Shih Tzu is considered very affectionate and the preeminent companion dog because it always tries extremely hard to please its owner. Even more telling, these dogs spend inordinate amounts of time attempting to get the attention of their master.

The original Schnauzer known for its standard size is a crossbreed between an Affenpinscher, a Miniature Pinscher, a Poodle, and a Pomeranian. When originally bred, the dog was crossbred this way to hunt farm rats and act as a measure of pest control. They also received training to become fantastic guard dogs. Breeding dogs diminished between the time during the two world wars, yet the Miniature Schnauzer remained an ever popular breed anyway. Back in the day, they were even bred to create a wide selection of varying colors. Today the majority of Miniature Schnauzers are typically black or silver.

This particular dog breed is well-known as an outdoors type and it has a tremendous amount of loyalty toward its owner and master. They also like to receive a great deal of attention, they,re affectionate, and will even snuggle up with their owners and loved ones. On the other hand, this dog breed is also capable of being stubborn, manipulative, and difficult when it’s experiencing stressful situations.

The Schnau Tzu is a combination of both of these dogs, so it shouldn’t shock anyone to learn that it will inherit traits from each breed. Although the personality quirks and traits will vary depending on how they manifest in each dog.

The average height of a Schnau Tzu is anywhere from 5-8 inches. This dog also tends to weigh roughly 7-15 pounds. Typically speaking, the dog’s coat is usually thought of as silky, but there’s potential for it to feel wiry or soft as well. The Schnau Tzu is sensitive to being touched, takes well to training, and if it’s healthy it will live roughly 10-12 years. 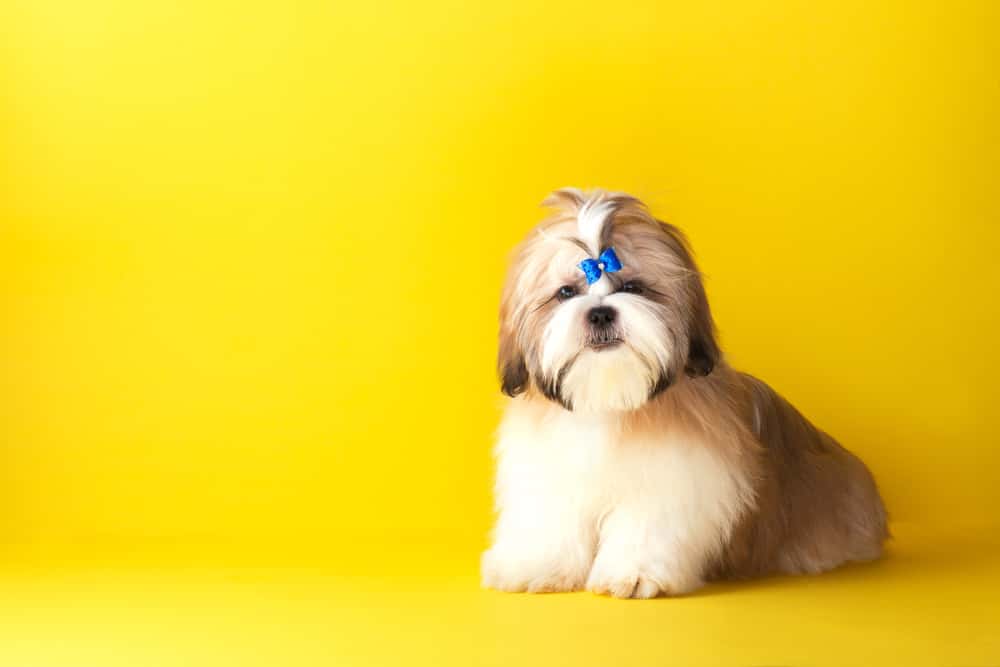 This is an incredibly playful, energetic, and smart dog breed. It always goes out of its way to please the people that take care of it. It has an attitude that also makes this dog quite easy to train. The Schnau Tzu is incredibly friendly to other people, yet when it is in the presence of other dogs, it’s often intimidated because of its very small size. If you own bigger dogs that live in the household, your Schnau Tzu may take a while to eventually warm up to them.

SchnauTzus are actually quite sociable, so it’s easy to teach them how to behave when they spend time in the presence of other people. Nevertheless, they do much better with children when compared to other dogs and adults.

Has anyone told you that a Schnau Tzu also has the potential to be a moody dog? This is very true and most noticeable when your Schnau Tzu is tired, hungry, thirsty, or isn’t the current center of attention. A Schnau Tzu will also experience moments when it has a temperamental side, but these temperamental episodes aren’t a major cause for concern because they rarely happen.

You simply need to take good care of your Schnau Tzu and show it lots of attention and love to prevent unwanted mood swings. SchnauTzus typically befriend strangers very easily and fail to bark a lot, so they aren’t the best watchdogs. These dogs mostly only bark when you ignore them for a long time or when you play with them.

A Schnau Tzu is in very particular or picky about its environment. Just let your dog live in a dry and clean place and it will be fine. Since it’s such a small dog, it does well in smaller apartments.

A Schnau Tzu is a dog that likes to remain active, so you should allow it to experience physical activity for 45-60 minutes per day. Even though they’re small in stature, these dogs definitely lead an active lifestyle, so you should play with it indoors and take it for walks that add up to about an hour of time each day to allow your furry friend to get the best amount of exercise. And if your dog is large enough and meets proper size requirements, you can get him or her a doggie treadmill or even take them to the dog park. Regardless, since it’s such a small dog it’s very simple to take it wherever you go without much trouble. Even better, you don’t have to worry about this breed causing any property damage.

As far as dietary requirements are concerned, it isn’t necessary to feed a Schnau Tzu a tremendous amount of food. Basically feed them a half a cup to a full cup of high-quality dry dog food two times a day. Also make sure that your dog stays hydrated with a proper supply of fresh water. Regarding Schnau Tzu feedings, please keep the following in mind:

A Schnau Tzu can get trained quite easily, and this is especially true if the pooch is still young. It’s an intelligent dog that easily picks up signals from its owner. These dogs are bright, responsive, and quite obedient as well.

Like many other dog breeds, when you teach yourSchnau Tzu, you should remain thorough and consistent until the dog picks up the behavior you’re attempting to teach it.

As far as other dogs are concerned – the bigger dogs in particular – SchnauTzus are much less confident and unsure of themselves when approaching bigger dogs.

As far as grooming is concerned, you have the option to take your dog to a groomer to get its hair brushed or you can handle this yourself. You should only brush your dog twice a week because any more isn’t necessary. And when bathing your dog, make sure to shampoo and condition their hair every two weeks unless your dog is indoors most of the time, in which case you can wait even longer.

Schnau Tzu dogs are known to suffer from particular health issues like most other dogs. They are susceptible to the same health conditions that their parents are susceptible. They include potential problems like:

It’s necessary to remember that your Schnau Tzu should receive the right medical attention if it is acting abnormally. And when you purchase your dog from a breeder, ask them about potential health problems and make sure it is cleared of any unwanted conditions. Visit the breeder prior to buying the puppy to check out the environment and make sure it is well tended.

You can buy a Schnau Tzu from a local breeder, or spend time looking for one online. If you are trying to adopt or purchase one, remember that some breeders are only in it for the profit. It makes sense to research the place to make sure animals are treated ethically and well before paying for your dog.

How Much Will I Pay for a Schnau Tzu?

For the most part, the typical Schnau Tzu will cost $150-$450. Other expenses are involved like chipping, collars, carriers, spaying, shots, deworming, blood tests, and other expenditures that’ll cost around $400. Nonmedical purchases will include training, treats, food, toys, grooming, and more that could cost around $600. Overall, you’ll spend about $500 per year on medical expenses as well.